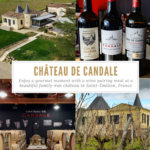 A little castle with its turret sits seemingly suspended on the famed Saint-Émilion slope overlooking the Dordogne. It’s the charming Château de Candale, which is family-run with its 13 hectares on the southern slope and a sea of vineyards in every direction. With a charming visit to taste the wines from three of the family-owned Saint-Émilion wineries and an onsite restaurant that is among the best in Saint-Émilion, Château de Candale is a must-stop in the Bordeaux wine region.

The History of Château de Candale

Château de Candale has been a fixture of the Saint-Émilion landscape for centuries. It was originally founded by Lady Margaret, Countess of Kendal, sometime in the 1400s. Lady Margaret was a descendant of Edward III, who was King of England and Duke of Aquitaine. She married the Castelnau-de-Médoc born Jean de Foix, whom became the Earl of Kendal. Their titles in the French form were Comte de Candale and Comtesse de Candale, which gave the name to the château.

As with so many Bordeaux châteaux, Château de Candale would change hands many times throughout the centuries. In modern history, the Adams family and owners of neighboring Chateau Fonplegade sold Château de Candale to Jean Louis Vicard in 2010.

The Vicards are well known in the Bordeaux wine region and Cognac for their barrel making company, Cooperage Vicard, which was founded in 1875. But in this venture into wine-making at Château de Candale, Jean Louis increased the size of the vineyards to the current 13 hectares.

It was only recently purchased by Magali and Thibaut Decoster in 2017. Not new to producing wine, Château de Candale is one of four Saint-Émilion châteaux owned by the Decoster family.

The Decosters weren’t always a wine producing family, though. It was Thibaut that developed a passion for wine and dreamed of owning a château. His family encouraged him to go work in the vineyards to realize the level of work involved. And Thibaut did just that, working in Léognan for more than three years.

He and Magali purchased their first château, Clos des Jacobins in 2014. And over the course of more than 15 years in the wine industry, they have also purchased Château La Commanderie and Château Roc de Candale.

With their total of four Saint-Émilion châteaux, two of which are prestigious Saint-Émilion Grand Cru Classé estates, and a restaurant added in the venture, we’d say Thibaut’s experiment has been a sheer success.

The current project is to expand the wine making facilities at Château de Candale, so you’ll find a bit of construction happening when you visit in 2020.

The Visit at Château de Candale

Château de Candale has a privileged and gorgeous location on the southern slope of Saint-Émilion. As with most Bordeaux châteaux visits, the visit begins in the vineyard to understand the château’s unique terroir.

Here on the southern slope, the soil is made up of clay and limestone. The 13 hectares of vines are made up of mainly Merlot, along with Cabernet Franc and Cabernet Sauvignon. As it’s winter in the vineyard during our visit, it’s “le broyage”. It’s a process of pruning off the old vine shoots, crushing them up and leaving them at the root stock of the vines. This important winter process improves the soil quality to prepare the next vintage.

Moving in to the winery, we find Château de Candale primarily uses open top oak vats for their wine making. When you’ve visited as many Bordeaux wineries as we have, you’ll notice the trend is moving to stainless steel or concrete vats for vinification. It’s techniques just like this that make one Saint-Émilion wine so different from the next.

While wooden vats present challenges for the winemaker, the porous wood also allows for the micro-oxygenation of the wine. The wood vats themselves can add something to the aromas in addition to the aromas already present from the terroir and the grapes themselves.

Barrel rooms are always a personal favorite part of the visit, and Château de Candale’s is a feast for the senses. As soon as the door to the barrel room is opened, the scents of aging wine waft over you. Obviously the barrels themselves are an important part of Bordeaux wine as all red Bordeaux is aged in barrels for between 6 months to 20 months, depending on the style the winemaker wants to achieve.

But we don’t often talk in much detail about the craftsmanship of the barrels themselves, or the characteristics they bring to the winemaking process beyond adding oak. Château de Candale pays homage to their barrel makers (also called coopers) with a stunning series of photographs on the walls showing the process of barrel making.

Château de Candale actually uses eight different barrel makers to supply their barrels, including an Austrian barrel maker. Just as each winemaker has their own unique styles, barrel makers do as well. While “medium toasting” can be found across various barrel makers, each has their process for toasting.

When you visit many Bordeaux châteaux, you’ll often find winemakers are currently conducting an experiment of some sort of another. And at Château de Candale, their winemaker is experimenting with aging the same plot of wine in a different barrel from each of the eight coopers they use. Once it comes time for assemblage (the blending of the château’s wine), Château de Candale will identify the unique characteristics brought to the wine by the barrel.

All of this makes you eager in anticipation to taste the wines, and finally the moment arrives. Back in the boutique, with its barrels painted by local artists, three wines from three of the Decoster family’s Saint-Émilion vineyards are presented.

In addition to a vintage of Château de Candale and Château Roc de Candale, you’ll try a vintage of Clos de Jacobins. This was the Decoster’s first château and it has proudly been classified as a Saint-Émilion Grand Cru Classé B since 1954.

Château de Candale is one of just a dozen or so Bordeaux châteaux that have their own onsite restaurant. And they combine a visit of the château with a pre-fixe menu du jour for either lunch or dinner with the Prestige Visit. Following the visit and tasting of the three wines, a table awaits at the Atelier de Candale.

No matter if you come for the Presitge Visit or just come for a meal, there’s just something about dining in the vineyards. Château de Candale’s restaurant is one not to be missed and undoubtedly among the best restaurants in Saint-Émilion.

With the surrounding rolling vineyard hills and a view stretching all the way back to the forest, the ambiance of Atelier de Candale is only the beginning. In cooler weather like a winter visit, you can dine inside while still enjoying the views from the restaurant’s floor to ceiling greenhouse windows. In summer, you can dine outside on the terrace practically within reach of the vines.

The menu changes seasonally to showcase the fresh, local produce and products of the season. The bistronomique menu, a pre-fixe menu that includes the choice of starter, choice on main and choice of dessert, changes weekly. It’s the bistronomique menu included with the Prestige Visit, which also includes one glass of wine, water and a coffee to finish.

Of course, anyone can make a reservation with or without visiting the château and its a popular spot even among locals. You can choose to order a la carte, or choose the bistronomique or gastronomic tasting menus available.

I selected the bistronomique menu and started with the octopus carpaccio drizzled with olive oil, citrus and ginger.

For my main course, I chose the pork belly slow cooked for 15 hours from the farm Baruteau. The pork basically melted in your mouth. It was served with a duo of sweet potatoes with puree and baked sweet potato chips. I don’t even eat sweet potatoes, but I devoured the chips.

Tim opted to order a la carte, selecting the Limousine beef entrecôte. If you don’t know Limousine beef, it’s beef from the ancient breed of Limousine cattle that are raised in the Limousin in the north of the region. It’s really a top grade of beef and a regional specialty. It’s served with fries and roasted shallots.

The Forêt-Noire is a signature dessert of Atelier de Candale. If I were the Goldilocks of desserts, this one would be just right. The chocolate fondant is like a chocolate lava cake, only this one steps it up a notch with whole kirsch macerated cherries spilling out from the center along with the molten chocolate ganache. It’s dressed with a dollop of chantilly cream and an edible flower.

For something a little lighter, try the deconstructed tarte with black tea and grapefruit. It’s like afternoon tea in a dessert.

Getting ThereVisits and Tasting
Château de Candale is located about 3 kilometers from the village of Saint-Émilion. It’s best accessed by car from Bordeaux.

It’s possible to take the train from Gare de Bordeaux-Saint-Jean to Saint-Émilion and then rent a bicycle or e-bike from the Saint-Émilion Tourism Office to bike to the château.

Château de Candale is open for visits and tastings by appointment year round. The Prestige Visit can be scheduled with lunch or dinner following the tour and tasting in the Atelier de Candale Restaurant.

The boutique is open for tastings without appointment for a modest fee.

Our visit to Château de Candale was in partnership with Saint-Émilion Tourisme in order to bring you this story. However, Bordeaux Travel Guide maintains full editorial control of the content published on this site. As always, all thoughts, opinions, and enthusiasm for travel are entirely our own. This article contains affiliate links. When you book on Rue des Vignerons or Trainline through our affiliate sites, we earn a small commission at no additional cost to you.

Previous Post: « Château de Cérons: Discover a Little-Known White Bordeaux Appellation
Next Post: All the Ways You Can Visit Bordeaux From the Comfort of Your Couch »