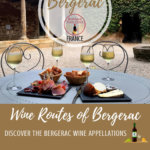 Wine has been made in Bergerac for thousands of years, but the Bergerac wine route often takes a backseat to the more famous Bordeaux wine region just located to the west. These wines, which can be markedly good, have played second fiddle to Bordeaux wine for centuries. As far back as the Hundred Years War and English rule over Bordeaux, Bergerac wines remained under French rule and were heavily taxed and even held back until after Bordeaux wines were exported.

Today Bergerac doesn’t pretend to be as important as its famous neighbor, but the wines are delightfully drinkable and excellent value. Sitting along the banks of the Dordogne River, this part of the South West of France is also incredibly charming and scenic. Between the very affordable wines, excellent cuisine, landscape and variety of things to see and do just to the east of Bordeaux, Bergerac definitely deserves some time on any itinerary in the Nouvelle Aquitaine.

Though only a tenth of the size of the Bordeaux wine region, there’s still plenty of unique vineyards and places to discover the wines of Bergerac. We’ve rounded up a few of our favorites where you can be introduced to the various terroirs of Bergerac wines.

For any Bergerac wine trip, the first and essential stop simply must be the Quai Cyrano Bergerac. Opened in 2019 right along the banks of the Dordogne with a 180° view of the old port, the Quai Cyrano is a space dedicated to wine, culture and tourism in the Bergerac & Duras wine region. It’s free to visit and a delight to enjoy in the heart of Bergerac.

All seven Bergerac terroirs are represented at the Quai Cyrano: Bergerac, Monbazillac, Saussignac, Montravel, Rosette, Pécharmant and Côte de Duras. Every day of the week from June to September a wine maker or château owner from the some 800 producers across the Bergerac & Durac wine region is present to welcome you and introduce you to their wines with a tasting.

There’s also a wine bar which offers 140 references from around the region. You can enjoy a glass along with products of the Périgord in either the 17th century Cloître des Récollets or on the terrace overlooking the old port.

And when you discover a favorite, there’s a shop to purchase the wines to take home. Or have the knowledgeable staff downstairs in the tourism office help you book a few visits at some of the châteaux themselves.

Monbazillac is certainly one of the most famous Bergerac wines and it’s renowned throughout the Dordogne. Some 7 million bottles of the sweet Monbazillac are produced each year. It’s been produced in the village of Monbazillac for centuries thanks to the quirky micro-climate created by the Dordogne River snaking along below the village.

Monbazillac (pronounced mohn-baz-ee-YAK) is similar in style to Sauternes wines since the same Sémillon, Sauvignon and Muscadelle grape varieties are utilized in the blend and botrytis is essential to producing both these sweet wines. But the two sweet wines are vastly different in taste since much more Muscadelle is used in the Monbazillac blend and the soil compositions have their own unique characteristics.

The castle itself is a museum with 20 rooms furnished from the Medieval and Renaissance times. While the first and second floors are a beautiful series of rooms from dining rooms to salons that can be toured, the basement is a museum dedicated to the production of Monbazillac wine. The exhibition walks visitors through the productions, various tools and even the castle cellar with aging Monbazillac in its various shades ranging from the lemony gold of young Monbazillac to burnt orange of older vintages.

When it comes to favorite vineyards to visit in the Bergerac wine region, it has to be Vignoble des Verdots because of their incredibly unique aging cellar. It’s like nothing you’ve ever seen, making this wine estate a must-see when doing a wine trip around Bergerac.

The estate itself is one of the oldest of the Bergerac wine region. It’s owned by the Fourtout family, who come from Saint-Émilion and have a long history of wine making. They left Saint-Émilion after phylloxera, and settled in Saint-Nexans. Current owner David Fourtout’s great-grandfather bought the vines in Conne de Labarde.

The winery is modern and stand right in the center of the village of Conne de Labarde. The terroir of this particular village is very unique, and during the development of the cellars the Fourtout family found out exactly the source of the unique terroir.

Running right through the very center of their cellar is the secret underground Verdots river. They discovered it during the blasting required to build their cellar in to the stone ground composed of limestone and flint, and decided to highlight this river that is undoubtedly the source of the unique terroir of Conne de Labarde.

The 600 square meter aging cellar exposes the unique underground river with a hole in the floor and numerous holes in the walls. Though the design choice to mold these oval holes into the walls and expose the limestone with its glittering quartz forming creates a really spectacular aesthetic, it was actually a very practical design choice too. The oval holes allow for air flow, which naturally regulates the cellar’s temperature without the intervention of equipment.

The wine shop is open year round to pop-in for tastings. To see the underground cellar, you’ll need to pre-arrange a visit in advance. And during summer, Vignoble des Verdots offers a hike along a marked trail in the vineyards of Conne de Labarde with a picnic lunch (advance reservations required).

You can even sleep among the vines in one of the two bed & breakfast rooms that occupy one of the towers of the cellar house. The Merlot room is perfect for a couple, while the Muscadelle room can accommodate a family with the duplex having enough space for up to 5 people.

Located only 12 kilometers from Bergerac in Colombier, Château de la Jaubertie is certainly one of the most renowned wine estates of the Bergerac wine region. Originally a hunting lodge of Henry IV and then a gifted home to his mistress, Gabrielle d’Estrées. It’s a remarkably beautiful estate that has engaged in wine making activities since the 18th century and been classified a “Monument Historique” since 2005.

The estate has been owned by the Ryman family (the very Ryman family famous for the stationary company in the UK) since 1974. Swapping paper making for wine making, it’s Hugh Ryman at the helm and under his direction Château de la Jaubertie has been certified organic since 2005.

White, red and rosé wines are produced under the AOC Bergerac appellation. And, as Château de la Jaubertie sits on the edge of the Monbazillac appellation, they also produce Monbazillac. The 50 hectares of vineyards are composed of many of the same grape varietals found in Bordeaux, plus several hectares of Chardonnay vineyards.

Château de la Jaubertie’s Cuvée Mirabelle line is their most well-known, with only grapes from the very best parcels selected to produce the white, red, rosé and Monbazillac wines in this range.

You can tour the vineyard and wine making facilities upon request, and the boutique is open with free wine tastings of their range of wines without appointment.

Château de la Jaubertie, 24560 Colombier. Open Monday – Friday year round from 10am – 5pm and Saturdays in summer from May – September.

Just to the east of Bordeaux is Château Laulerie, in the Montravel appellation. Founded in 1977, it is the first wine estate of the Dubard family and they’ve since grown to also own wine estates in the Lalande de Pomerol and Puisseguin Saint-Émilion appellations in the Bordeaux wine region. More than 40 years later at the helm are Marine and Gregory Dubard, the second generation of the family.

Both Marine and Gregory studied wine making and vineyard management. Marine, who I met as one of the winemakers at the Quai Cyrano, told me she spent time in New Zealand. It inspired her to bring back some of the techniques and adapt them to their Bergerac and Bordeaux vineyards.

Montravel wines have really distinguished themselves for their sumptuous notes thanks to the difficult growing conditions in this part of the Bergerac wine region. Composed of a blend of Merlot (at least 50%) and Cabernet Sauvignon, Cabernet Franc or Malbec, these are Bergerac wines meant to keep and age.

To visit the estate, advance booking is necessary. Visits can range anywhere from 15 minutes for a simple tasting to 1 hour to tour the estate.