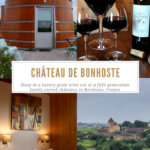 Château de Bonhoste has been a part of the Bordeaux landscape since the 11th century and is a fifth generation family-run estate. Just a 20-minute drive from the center of Saint-Émilion, the 44 hectare estate sits on a hill overlooking the beautiful Dordogne Valley just outside the commune of Saint Jean de Blaignac.

We found this château to be a bit different than the majority of Bordeaux châteaux. Here in this acclaimed wine region, the focus is typically on producing just one or two wines: a first wine made from the château’s best grapes and often a second wine of the château produced with the grapes that didn’t quite make the cut to be a first wine. At most Bordeaux châteaux, you can expect to taste 2-3 different vintages (vintage meaning the year of the harvest) and sometimes a second wine of the château. It’s even a bit rare to find a château produces both red and white wines.

At 44 hectares, Château de Bonhoste is quite large for a right bank Bordeaux estate – the average Saint-Émilion vineyard is 7 hectares. With all that land dedicated to growing grapes, you can find 9 different wines produced at Château de Bonhoste ranging from white to red and everything in between. Plus, you can taste wines of their sister château located in Bergerac. Not to mention the fabulous giant wine vats that have been converted into some of the most unique accommodation in Bordeaux for a memorable night spent in the vineyards, the escape room game in their historic cellar, or the gourmet wine tasting with seasonal tapas and wine pairings.

The History of Château de Bonhoste

The château itself dates back to the 11th century, but it was 1895 when the family arrived in Saint Jean de Blaignac and began the wine making activities here. And as sometimes happens with the wine making families of the south west of France, a girl and a boy fell in love. It was the marriage of Bernard and Colette, the fourth generation of the family to run Château de Bonhoste, that also joined Colette’s family’s wine château in Bergerac with the family business.

Since 2005, Bernard and Colette’s children have been running the estate as the fifth generation of the family. Yannick studied viticulture and oenology, and is in charge of wine making with practices that are quite close to organic farming. Sylvaine has degrees in economics and business management, and is quite clever with the marketing.

The Visit at Château de Bonhoste

Château de Bonhoste offers several different visits. Open daily, you can drop in for a free tasting in their tasting room and shop without an appointment. To visit their underground cellar, have a gourmet picnic of seasonal tapas or try your puzzle solving skills in their escape game, be sure to book in advance.

No matter if you choose a discovery tour, gourmet picnic in the vineyard or the escape game, the visit begins in the vineyards. Here you’ll find all six of the most common Bordeaux grape varietals with the vineyards planted with 70% Merlot, 20% Cabernet Sauvignon and 10% Cabernent Franc for their red wines, and 55% Semlillion, 40% Sauvignon Blanc and 5% Muscadelle for their white wines.

The southern slopes of the Dordogne River where the château is located is composed of clay limestone soil, which provides excellent drainage. That’s particularly good for the exceptionally wet and unusual summer we’re having in Bordeaux this year. Since it was coming down in buckets and we’d spent the night next to the vines, Juliet drove us up to the cellar in the golf cart. Otherwise, it’s a lovely walk through the vineyards to the cellar.

In the winery, Juliet explained the wine making process for each of the wines. It’s quite a different process for red, rosé and white. The biggest difference and something many people don’t realize is that all grapes have a white-gray juice, but the color for red and rosé comes from the maceration of the skins during the fermentation process. Steel tanks are often a popular choice among Bordeaux wine makers because the wine maker can easily control the temperature and the punching down process during maceration.

But it’s the cellar that is truly exceptional at Château de Bonhoste. Located underground, it was excavated 200 years ago and originally served as a limestone quarry. The buildings of Bordeaux were built from limestone excavated from this quarry and quarries like it in and surrounding Saint-Émilion.

Since the 1300 square meter quarry maintains a consistent temperature year round and is very humid, it’s a perfect place for storing and aging wine. One of the resident bats zips by, a reminder of what a fascinating place the cellar is with its hint of spookiness. It’s also here that Château de Bonhoste’s escape game takes place.

None of the bottles are labeled until they’re ready to be sold, since the humidity would eat away the label. There’s even some Melchoir, which are 3-feet tall 18 liter bottles. The Melchoir holds the equivalent of 24 bottles of wine.

Back in the tasting room, you can taste Château de Bonhoste’s full selection of wines and also a selection from their sister Château la Moulière in Bergerac. They even produce the AOC Crémant de Bordeaux, which is the sparkling wine produced for over 100 years in Bordeaux in the champagne method. And if you’ve eaten at Le Bordeaux Gordon Ramsay at the Grand Hotel, you may have even already tried the Crémant. Gordon Ramsay himself personally selected Château de Bonhoste’s Crémant de Bordeaux for his namesake restaurant.

Two large wine vats sit nestled in a lovely garden just next to the vines on the estate of Château de Bonhoste. They’re real wine vats made by Seguin Moreau, and you can find similar ones as you tour many Bordeaux châteaux or the Cognac houses of Cognac. These large barrels, known as foudres in French, hold 1200 hectoliters of wine or the equivalent of 160,000 bottles.

Normally these large wine vats are used for the vinification process and to age wine before bottling, but the Fournier family had the idea to create two unique accommodations in the Bordeaux vineyards.

Each of the two wine vats is beautifully decorated with attention to detail and art work. They each have a very comfortable double bed, a full bathroom with shower and a kitchenette equipped with a Nespresso machine, tea kettle, mini-fridge, toaster and microwave. There’s a small sitting area inside and a table for dining outside. There’s even wifi, television and air conditioning – that is if you can pull yourself away from the romantic setting to actually make use of the wifi and television.

A bottle of 2013 Château de Bonhoste Bordeaux Superior Cuvée Prestige was waiting for us to enjoy, and we did just that while watching a stunning sunset in the vineyard.

Upon request, you can order a picnic-style dinner. There’s also several restaurants within just a few kilometers drive. We headed over to the village of Rauzan, where’s there the cute rock-n-roll themed Cabane Pizza. Dine in or take out pizzas named after Led Zepplin, AC/DC and Chuck Berry.

Sylvaine brings a breakfast basket full of delicious breads and pastries, jams and yogurt for breakfast in the morning. Our fridge had already been stocked with grape juice, milk and cheese the night before. There’s also fresh fruit and a selection of cereals.

Perfectly cozy, Coup 2 Foudres is ideal for a romantic and unique night in the vineyards.

Getting ThereSleep at Coup 2 FoudresVisits and Tasting
Château de Bonhoste is located about a 20 minute drive from Saint-Émilion and is best reached with a rental car.
There’s two wine vats at Coup 2 Foudres: Lovely Cosy and Metal Glam. Both have all the same amenities. We stayed in Lovely Cosy, which is the closer of the two wine vats to the vineyard. The stay includes breakfast and a tour and tasting at Château de Bonhoste. The gourmet dinner must be requested separately.
BOOK NOW
Château de Bonhoste is open daily from 9am – 6pm. Tastings are free and no appointment is necessary. For a guided visit of the underground cellar with tasting, it’s best to book in advance. Appointments are required for the gourmet tapas picnic or escape game.

Our stay at Coup 2 Foudres was in partnership with Saint-Émilion Tourisme in order to bring you this story. However, Bordeaux Travel Guide maintains full editorial control of the content published on this site. As always, all thoughts, opinions, and enthusiasm for travel are entirely our own. This article contains affiliate links. When you book on Booking.com through our affiliate partner site, we earn a small commission at no additional cost to you.