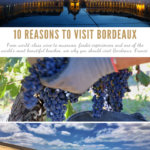 Bordeaux isn’t just a city with the same name as the famous French wine. With 350 historical buildings and monuments, dozens of museums and art galleries, a brand new wine experience center and some of the best food in all of France, its no wonder even the Parisians are leaving Paris for Bordeaux.

Take a look at why Bordeaux should be on your radar for your next trip to France and join our Bordeaux Travel Facebook group to get even more of our tips.

La Cite du Vin, the world’s first wine museum of its kind, opened to much fan fare earlier this year. Though museum is hardly the right word to describe it. Interactive wine experience is more fitting.

The exhibits are interactive and engage anyone from the casual wine drinker to the wine aficionado. You can also sign up for a variety of classes offered and every visit ends with a wine tasting on the top floor’s panoramic wine bar.

2. Europe’s largest sand dune is a short train ride away.

Towering at 110 meters high, Dune du Pilat is the largest sand dune in Europe. It’s steep sand goes straight down to the Atlantic Ocean and if you’re brave enough to run down it, you can find stretches of empty beach. Just remember that you have to climb back up it!

Adventurers also won’t want to miss the opportunity to go parasailing off the top of Dune du Pilat.

3. The world’s largest reflecting pool is there…and splashing around in it is encouraged.

When the Miroir d’Eau opened in 2006, the French were horrified that anyone would even consider walking on the 3,450 square meter artwork. That quickly went out the window and the Miroir d’Eau became the coolest place to be, especially on a hot summer day.

There’s always something going on there from the Sunday night salsa parties to any number of musicians putting on concerts. It’s definitely Bordeaux’s best free attraction.

4. It’s one of France’s most bicycle friendly cities.

Much of Bordeaux’s center is car-free and with the VCub bike-share, it’s easy to grab a bicycle from one of the cities many stations to explore. Or take a bike tour of Bordeaux’s sights for an active way to explore both banks of Bordeaux.

The city has been committed to leading the way for cyclotourism in France and new car-free bike trails are always being added to the already excellent network. You can cycle on a car-free routes like the 26-kilometer Voie Verte Roger Lapébie from Bordeaux’s city center to the wine chateaux of Libourne or the 60-kilometer ride from Bordeaux to Lacanau-Ocean on an old abandoned railway track. Heck, you can even cycle the 250-kilometers to Toulouse.

5. It’s one of the best foodie cities in the world.

Bordeaux is the best of both worlds with its proximity to the Atlantic Ocean and the Dordogne. France’s most famous oysters come from the Arcachon Bay just 30 miles from the city and France’s best foie gras comes from the Aquitaine.

Aside from the incredible locals ingredients, bright young chefs and Michelin-starred masters of fine food like Gordon Ramsay and Joël Robuchon are all flocking to Bordeaux to open their eateries. Tiny bistros on insanely beautiful streets pair their innovative Southwestern-French menus with Bordeaux’s great wines for foodgasmic experiences.

6. Speaking of the wine…

The Bordeaux region is home to more than 7000 wine chateaux producing some 700 million bottles each year. In other words, there’s no shortage of wines to try or vineyards to visit.

Of course, not every wine château accepts visitors and many just can’t be reached without a car. Saint-Émilion, a Bordeaux Right Bank appellation and a gorgeous medieval village, is an excellent choice for a vineyard excursion.

You can reach Saint-Émilion on a direct train from Bordeaux in just 30 minutes and many vineyards are easily accessible on bicycle. There’s even a Saint-Émilion Grand Cru Classé château you can visit steps away from the train station. If biking through the vineyards just isn’t your thing, there are also tuk tuk tours you can take to various chateaux.

Technically, Bayonne is the chocolate capital of France. But Bordeaux’s neighbor to the south is in the same region and hundreds of chocolatiers have set up shop right here in the Port of the Moon.

It’s not surprising if you know the history of Europe’s cocoa confection. It all began with the colonists bringing cocoa beans back to Spain, but the bitter taste didn’t please many palates. When the Spanish Inquisition sent Spaniards and Portuguese flocking to Bayonne in the 17th century, they brought their cocoa beans with them and figured out how to turn it in to something delicious.

You can even hop on the train and easily make a day-trip to Bayonne to eat your way through the French-Basque town’s chocolate shops.

It doesn’t have the elegance of the Pont de Pierre, but the Pont Jacques Chaban-Delmas does have a certain je ne sais quoi. Inaugurated in 2013, it is an architectural feat.

The bridge is the fifth bridge to cross the Garonne, connecting Bordeaux’s Left Bank with the Right Bank. At 575 meters long and 77 meters high, it’s the tallest and longest vertical lift bridge in Europe. It only lifts about 120 times each year to let the taller ships pass under, so if you catch it in action it’s really quite special.

At night, it lights up and is a striking modern masterpiece among Bordeaux’s skyline. The color of the pylons corresponds to the tide, with the green indicating low tide and the blue indicating high tide.

9. And another biggest in Europe: Rue Saint Catherine.

Rue Saint Catherine is Europe’s longest pedestrian shopping street at 1.2 kilometers. If you stand at the top at Place de la Comedie, you can marvel at how the street dips down before slightly ascending upward again when it reaches its end at Place de la Victoire.

10. It was voted Europe’s Best Destination and the World’s Best City to Visit in 2017.

Bordeaux beat out 20 other destinations, including Rome and Lisbon, by a landslide. As residents of Bordeaux, we might be a little biased but we have to agree with all the voters that helped the Sleeping Beauty win the designation in the European Best Destination competition.

Lonely Planet also selected Bordeaux as the world’s best city to visit in 2017. Bordeaux may not be France’s little secret for much longer with all these distinctions, so come now!

This article contains affiliate links. When you book on Trainline through our affiliate site, we earn a small commission at no additional cost to you.