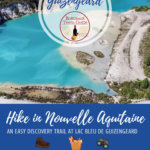 One of the best traits of Bordeaux is that it’s a bustling metropolis where you can get your dose of culture, but it’s also a quick and easy escape to nearby nature. While locals and tourists alike flock to the Dune de Pilat, there’s many more places to enjoy the natural gems of the South West of France. One of the lesser known spots are the secret blue lakes of Guizengeard, known as Lac Bleu de Guizengeard, with their intensely turquoise sparkling pools set in a pine and oak forest of the Sud-Charente.

In only a few years nature has reclaimed the area of what is now the nature reserve of Lac Bleu de Guizengeard. Arriving it’s almost shocking that this paradise of blue pools exists within a forest and near a small village. It’s a though it appeared out of nowhere! But this area served as a kaolinite (white clay) quarry from 1972 until as recently as 2013.

Kaolinite is a type of prized white clay that you may know is used to make porcelain, since it is extremely resistant to very high temperatures. The South of the Charente-Maritime department is rich in kaolinite and a number of quarries stretch along a band. The raw white clay is a material much sought after for its mineral purity and finesse. And aside from being used in the production of fine porcelain, it’s used in the manufacture of everything from paint to fertilizer.

After the quarry ceased operation in 2013, rain water filled the quarry sites and created the artificial lakes we see today. The turquoise color comes from the lack of life in the water and the sunlight not being absorbed by any particles in the lakes.

You notice a distinct color difference between the two lakes. One, which has some acid in the water, is turquoise. The other lake, which has started already to see some life such as turtles, frogs, otters and beavers, has already taken on a darker color.

So Lac Bleu de Guizengeard is truly a special place because over time as the environment allows for the development of life within, the water color will darken. But for now, these artificial lakes remain remarkably clear.

Of course, the highlight of Lac Bleu de Guizengeard are the spectacular two lakes that formed in the former white clay quarries. This area is ecologically rich though, and was rehabilitated in a project by AGS and the Conservatoire Régional d’Espaces Naturels de Poitou-Charentes to create a discovery trail.

Encompassing an area of around 100 hectares, the former kaolinite quarry is now home to exceptional biodiversity including the colorful migratory bird, the European bee-eater. Take around 2-3 hours to follow the discovery trail, which is posted with signs informing visitors about this unique site.

Start the discovery trail by parking in front of the Église Sainte-Jean-Baptiste. It’s a church that is practically hidden in the woods and stands on the site of a 12th century command of the Knights Templar. Though the church itself seems modest in decoration, it does have one of the oldest bells in the Charente that dates from 1495. It gained status a historic monument in 1983.

The discovery trail begins just behind the church in the Double Saintogeaise pine forest, which is the northern part of the Landes – the largest pine forest in Western Europe. As Lac Bleu de Guizengeard is best appreciated on a hot, cloudless day when the sun can really illuminate the turquoise and green colors, the shade of the maritime pines, chestnut and oaks offer a refreshing respite from the heat of the day.

Follow the path through the pines and to the first lookout, where you suddenly come to the edge of the pine forest on the white clay cliffs overlooking the greener of the two lakes. It’s called the Grand Bois du Marais. From the cliff’s edge observation point, you get your first look at the lake, the wetlands beyond and the unmissable Marais stream in the distance. It’s distinctly red in color, a stark contrast from the green and turquoise lakes, thanks to the stream being rich in iron.

The discovery trail does bring you down to the banks of the grassy wetlands at the Grand Bois de Marais. Unlike the more fragile Guêpiers lake, the Grand Bois de Marais lake is not fenced in. It’s forbidden to swim at either of the lakes for safety and to preserve the fragile environment, but setting up a blanket on the banks and under the shade of the pines is a pleasant way to relax.

If you’re quiet enough, you might spot some of the wildlife like the beavers, otters, turtles and frogs that have started to take up residence in the wetlands. And if you’re visiting from May to July, you’ll almost certainly spot the flocks of European bee-eaters that have come from Africa to couple up and nest.

Continuing to the circuit around the turquoise Guêpiers, the path climbs back to the white clay cliffs overlooking the lake. It’s well worth the climb up for the overlook, where you can see the shades of yellow from the acid in the water at the cliffs edge. Sandy islands appear to dot a portion of the lake.

A fence and a moat of pines surrounds the lake known as Guêpiers. The cliffs were formed by the previous quarrying activity and are extremely unstable. With only 10-15 meters visible above the water’s surface, the cliffs actually stretch far deeper. And they’re expected to retreat up to several meters over the next few years as vegetation roots itself and grows on the former quarry’s edges.

The trail continues once again through the forest high above the lake, before descending back down along the other edge where you can discover more about the quarrying that took place here.

Though we didn’t spot any, the info panels inform us that a lot of wildlife has come to call this nature preserve home in the less than a decade since it has been transformed from quarry to paradise. Aside from the beavers, otters, turtles and European bee-eaters already mentioned, there’s also been European genet, roe deer, white stilt and kingfisher that have moved in. They’re all essential to the continued biodiversity development of the former quarry. So remember to be respectful of this fragile environment when you visit.

Getting There
A car is essential to reaching Lac Bleu de Guizengeard as there is no public transportation connections nearby.

From Bordeaux Centre, take the A10 to exit 39B Barbezieux. Follow the map below to the parking at the church and the discovery trail starting point.