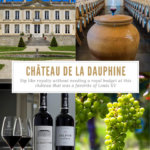 Fronsac is one of the oldest wine producing appellations of the Bordeaux wine region, with vines in this satellite appellation dating back to the Romans. Though the Fronsac appellation’s modern history wouldn’t begin until the 20th century with the official designation of the Cotes de Fronsac appellation in 1936, these wines have long graced the tables of French kings.

It was Cardinal Richelieu who introduced the wines of Fronsac to Louis XV, bringing fame and prestige to the wines. Fronsac became some of the most sought after wines in all the kingdom, no doubt lending to Maria Josepha of Saxony, Dauphine of France’s, desire to visit Fronsac.

It was this impending royal visit that saw the building of the castle on the estate of Château de la Dauphine, and gave the château its name. And today you can sip like a royal with a visit to this regal estate nestled along the snaking Dordogne, without the need for a royal budget.

With the archives dating back to at least 1670, Château de la Dauphine is among the oldest vineyards in the Bordeaux wine region. The estate was sold in 1709 to a financial advisor to Louis XIV and remained in the same family for three centuries.

The château itself wasn’t built until between 1744 – 1750, and was built for the purposing of welcoming Maria Josepha of Saxony, Dauphine of France, for a stay. As daughter-in-law of Louis XV and wife of the heir apparent to the kingdom of France, the princess could only be welcomed with the utmost elegance and style.

Princess Maria Josepha of Saxony never herself became a queen thanks to her husband’s untimely death before ascending the throne. She was, however, mother of three kings of France: Louis XVI, Louis XVIII and Charles X.

With links to royalty and an estate named for the Dauphine, Château de la Dauphine was one of the most expensive and highly prized wines of the 18th century. The estate’s reputation easily equaled, if not surpassed that of neighboring Pomerol and Saint-Émilion.

The arrival of phylloxera in Bordeaux brought about the decline of the château, and it fell into disrepair. It was still owned by a direct descendant of the original owner, François Regis Marcetteau de Brem, who decided to sell it in the 1980s.

After a 10 million Euro investment that included restoration of the château and brand new wine making facilities with an innovative gravity fed system, Château de la Dauphine was once again on its way to becoming a rising star in Fronsac. Château Canon de Brem, which was also included in the sale from the Moueix family, was merged into Château de la Dauphine to further increase the quality, leaving it as the second largest wine producing estate in the Fronsac appellation.

The château was once again sold, this time to the Labrune family in 2015.

The visit at Château de la Dauphine begins with a walk through the shaded park with its ancient trees. A long row of umbrella pines, where the original driveway once was, now provide a tranquil view of the honey-colored château.

Standing with the majestic château before you, we hear the tale of a fall from grandeur to squalor. It’s hard to imagine that barely 20 years ago, such a beautiful place could be in such bad condition.

Today the château itself serves as a holiday home for the Labrune family, and in fact, they’re there for a summer holiday during our visit. But the Labrune’s welcome visitors to tour the ground floor, where as much of the historic elements were salvaged as could be.

The central living room is impressive and has so much to take in. Each corner of the ceiling is sculpted with a woman’s head, and you immediately realize each is unique. The four corners represent the four seasons.

The original banister of the staircase was also preserved. You can imagine Maria Josepha of Saxony ascending these stairs to her bedroom during her stay at Château de la Dauphine.

Back outside, there’s 11 hectares of vines that are enclosed by the walled clos. Located at the top of the Fronsac plateau, this is one of the highest points in the Fronsac appellation. It’s here that the very best grapes grow and go on to become the first wine of the château.

Since 2012, Château de la Dauphine shifted to organic farming techniques. And in 2015, the estate received their organic certification. They’ve also been working on the adoption of biodynamic methods and have an increasing number of hectares of vines in which they experiment with the biodynamic techniques.

The winery is semi-underground and entirely modern. The circular winery was incredibly innovative when it was built 20 years ago and remains at the forefront of innovation in both the Fronsac appellation and on the Right Bank of Bordeaux.

Château de la Dauphine uses a gravity fed system. The grapes arrive to the winery and after destemming and sorting, drop into the tanks that line the walls of the winery. A machine that functions like the arm of a clock can easily be pushed entirely around the circular winery to easily drop grapes from each parcel into their own tank for vinification.

The château was also among the first in Bordeaux to use a vertical press, and the press is still in use today.

The barrel cellar is a delight for the eyes and the nose. It houses 600 French oak barrels, with 30% of the barrels renewed each year. There’s also two amphora, where famed Bordeaux oenologist Michel Rolland is experimenting with aging some special cuveés.

The luxury tour ends with a tasting back in the boutique. Château de la Dauphine actually produces red, white and rosé. Their Bordeaux rosé is produced in the Provence style, and it’s a summer favorite of ours for when its just too hot for a heavier Bordeaux.

All the wines of Château de la Dauphine are really outstanding and priced reasonably between €18 – €35 per bottle.

Getting ThereVisits and Tasting
Château de la Dauphine is best visited by car and is located about 45 minutes drive from Bordeaux Centre.

Alternately, you can take the train from Gare Saint Jean to Gare Libourne. Then we recommend renting bicycles to ride the 4 kilometers to Château de la Dauphine.

Château de la Dauphine is open year round from Monday – Friday by appointment and during summer by appointment on Saturday and Sunday.
🍷 BOOK YOUR VISIT

This article contains affiliate links. When you book on Rue des Vignerons or Trainline through our affiliate sites, we earn a small commission at no additional cost to you.