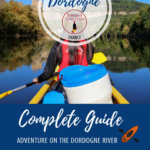 The Dordogne River flows west through the South West of France, snaking through the soaring cliffs dotted by ancient châteaux and some of the most beautiful villages in France in the Périgord Noir. One of the best ways to experience this stunning part of France is by grabbing some paddles and canoeing the Dordogne.

A Dordogne canoe trip can last from just a few hours to several days while also camping along the Dordogne’s shores. A Dordogne canoe trip can even combine adventure and luxury with a stay in a château converted to a luxury hotel along the way. But no matter whether you canoe the Dordogne on a day trip or on a multi-day Dordogne holiday, this French adventure needs to be on your bucket list.

It takes around 3 hours to canoe from Vitrac to Beynac, and there is a shuttle back to the launch point in Vitrac every hour with Canoës Loisirs. There are also points that you can you paddle ashore and visit some of the villages and their attractions along the way.

The route begins in Vitrac, considered to be the heart of the Périgord Noir. The beautiful village, a canton of Sarlat, has a population of just 872. But Vitrac once played an essential role in Bordeaux’s wine trade with England, first as a major producer of wine barrels and then as a builder of the Gabares (a special type of rive barge). The Gabares carried planks of wood for the barrels on the river to the Gironde.

There’s also a small island near Vitrac, which is a natural bird sanctuary. The Dordogne River is, after all, a UNESCO World Biosphere Reserve. You can not only admire the beautiful scenery of the honey-colored villages you’ll gently drift past, but also the possibility to spot birds like kites, buzzards and falcons.

The village of La Roque-Gageac is listed as one of Les Plus Beaux Villages de France, the most beautiful villages of France. The village sits on the Dordogne River and the honey-colored houses are built right in to the massive cliff that overhangs the village.

The village has been occupied since prehistoric times, making it one of the interesting villages to visit. On a walk through the village, follow the steps up to the troglodyte fort that dates back to the Viking invasions. On Friday morning from May – September there is also a food market and there are good restaurants in the village.

The Château de La Malartrie sits on the edge of the village. The castle dates back to the 12th century when it was originally a leper hospital. It sat abandoned for many years until it was purchased by the Count de Saint Aulaire. The Count transformed the castle in the Renaissance style it stands in today. It’s actually a lovely castle hotel you can stay in with a fabulous outdoor swimming pool.

A little further down the river, you come to Castelnaud-la-Chapelle. This is another of the most beautiful villages of France, which sits on the confluence of the Dordogne and Céou rivers. The village is known for its two castles.

Château Castelnaud was built in the 12th century as a show of power to face its rival castle Château de Beynac. This castle too was once abandoned and nothing more than ruins by the time of the French Revolution. The medieval fortress is beautifully restored and today is a museum of medieval warfare. You can even try your hand at archery, a discipline that was well mastered by the soldiers during the Hundred Years War, or firing a trebuchet during various times throughout the year.

The second castle of Castelnaud-la-Chapelle is Château des Milandes. It was built in 1489 by François de Caumont, the Lord of Castelnaud, as a gift to his wife. Josephine Baker purchased it in 1947 after falling in love it while renting it. And today it is a beautiful manor hour with stunning gardens, a birds of prey show and an on-site restaurant.

Foodies won’t want to miss a visit the family-run Ecomusée de la Noix (The Walnut Ecomuseum) in Castelnaud, as the Périgord is the birthplace of the walnut. Walnuts are inextricably linked with the history of the Dordogne. The people here have been eating walnuts since the prehistoric times of the Cro-Magnon some 17,000 years ago.

Walnut oil, the main product produced from Périgord walnuts, was once so valuable that it was worth its weight in gold. Walnuts and walnut oil played a role in contributing to the wealth of the region. Walnuts were even used as a form of currency for peasants to pay off debts and walnut oil was accepted as a form of payment for taxes due to the local churches.

The Ecomusée de la Noix is a walnut plantation that has grown walnuts on the 7 hectares of land atop the hill of Castelnaud since the 18th century. At the museum/plantation, which has been open to the public since 1996, visitors can discover all the various food products walnuts are produced in to including walnut oil, walnut liquor, walnut beer, walnut butter and candied walnuts.

The mills in the old farmhouse turn all year round, giving visitors a look at hold the high-quality cold pressed virgin walnut oil is produced. First, dry walnuts are slowly crushed under the ever-turning grinding wheel into a kind of dough.

The dough is then heated for 30 minutes in a large cast iron bowl that is manually stirred constantly by one of the workers.

The warmed dough is then transferred to the press, where the force of 32 tons of pressure extracts the translucent honey-colored walnut oil from the dough. Visitors are offered a taste of the just-pressed walnut oil. You’ll never taste walnut oil so fresh anywhere else.

There’s also a small museum to walk through, which also has a short film of the walnut harvest. There are incredible sculptures carved from walnut wood, art featuring the walnut, and educational plaques about the different varieties of walnuts grown in the Périgord.

In the shop, visitors can buy the locally made products of the walnut plantation.

The Ecomusée de la Noix is also a Périgord truffle plantation, and visitors are also welcome to learn about the process of truffle hunting. Noxo, the truffle dog, is happy to show off her truffle finding skills in a demonstration in the oak groves where truffles grow on the roots of the trees.

The third and final of the most beautiful villages of France to pass by on the 16 kilometer canoe trip from Vitrac is the village of Beynac-et-Cazenac. This beautiful village sitting on the north bank of the Dordogne River has been the setting for a number of movies, and Americans may have seen it in Chocolat with Juliette Binoche and The Messenger: The Joan of Arc Story with Dustin Hoffman.

There are quite a few shops and restaurants in pretty Beynac, but it is best known for Château de Beynac that crowns the top of the clifftop village. Château de Beynac is the best preserved of the Dordogne’s more than 100 castles.

The oldest part of clifftop castle was built in the 12th century by the barons of Beynac. The sheer cliff face was deterrent enough, so the oldest part of the castle is a Romanesque keep built on the plateau with a double moat, double crenellated walls and a double barbican. It was enlarged in the 16th and 17th centuries.

During the Hundred Years’ War, Château de Beynac was held by the French. The Dordogne River served as the border between France and England, and Château de Castelnaud on the opposite bank was held by the English. For a brief time it was captured by Richard the Lionheart.

The castle has been listed as a monument historique (a designation given to some French heritage sites) since 1944 and was purchased and restored in 1962. Today it is like a living museum transporting visitors back to the times of Richard the Lionheart and Elinor of Aquitaine. You can explore the dungeons, great halls with their sumptuous tapestries and get an incredible 360-degree view over the Dordogne valley from the towers.

Where to Stay in the Dordogne

Château de La Malartrie is a castle hotel overlooking one of the most beautiful villages of France, La Roque-Gageac. The castle has five rooms, each unique and named after various castle of the Dordogne. The Commarque room is a family room and our personal favorite is the decor of the Milandes room. There are also two apartments that have kitchens and are perfect for longer stays or families/groups.

Breakfast is included and is a spread of delicious foods from local producers of the Périgord. There’s also an outdoor heated swimming pool. And you can book massages for a relaxing moment or to soothe sore muscles from paddling on the river.

Located about an hour drive away from Vitrac is Château Dans Les Arbes, or the “castles of the trees”. These unique accommodations are luxury tree houses built to resemble several of the real castles of the Dordogne.

Each tree house at Château Dans Les Arbes is unique, but all of them either have a nordic-style hot tub or jacuzzi on their deck. Some even have more than one bedroom and are perfect for a family or friends traveling together. Breakfast of local products is delivered to the tree houses each morning in a picnic basket guests haul up using a pulley system.

Château Dans Les Arbes also has an outdoor swimming pool for guests, offers other activities like table tennis, petanque and games, and has a network of hiking trails. See what other travelers have to say at TripAdvisor.

Getting ThereVisits and Tasting
The Dordogne is best explored by car and there is free parking onsite at Canoës Loisirs in Vitrac. There is a train station in Sarlat-la-Canéda about a 15-minute drive away, and taxis are available to take you to Vitrac.
Canoës Loisirs speaks English and is open for continuous departures from 9am – 5pm daily. Book in advance by sending a booking request through their website.

Note that closed toe shoes are required and that children must be at least 5 years of age.

This article contains affiliate links. When you book on Booking.com through our affiliate sites, we earn a small commission at no additional cost to you.

Previous Post: « The Dordogne’s Tree House Castles You Can Sleep In
Next Post: Where to Find the Best Burgers in Bordeaux »